A Brief History Of Christmas 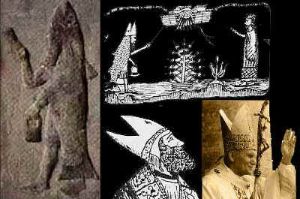 The Christmas Tree here in ancient carvings shows the Pagan custom... The fish symbol you see today stems from these same pagan customs.... The Roman Pontiff is simply a regurgitation of the old pagan sun god’s hat dating back to Nimrod of Ancient Babylon 2234 B.C.
In ancient pagan times, the last day of winter in the Northern Hemisphere was celebrated as the night that the Great Mother Goddess gives birth to the baby Sun God. It is also called Yule, the day a huge log is added to a bonfire, around which everyone would dance and sing to awaken the sun from its long winter sleep.
In Roman times, it became the celebrations honouring Saturnus (the harvest god) and Mithras (the ancient god of light), a form of sun worship that had come to Rome from Syria a century before with the cult of Sol Invictus. It announced that winter is not forever, that life continues, and an invitation to stay in good spirit.The last day of winter in the Northern Hemisphere occurs between the 20th and 22 December. The Roman celebrated Saturnalia between 17 and 24 December.
The early Christians to avoid persecution during the Roman pagan festival, early Christians decked their homes with Saturnalia holly. As Christian numbers increased and their customs prevailed, the celebrations took on a Christian observance. 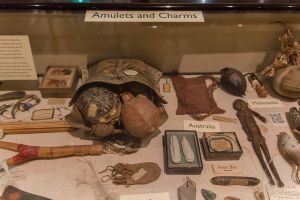 For thousands of years people have tried to bring good luck and avert bad luck from them and their property by employing charms, amulets, and talismans.  A charm is a practice or expression believed to have magic power, similar to an incantation or a spell.[1]  A talisman is an object bearing a sign or engraved character, and thought to act as a charm to avert evil and bring good fortune.[2]  Amulets were used to protect man, or his possessions, such as houses and cattle from the evil influences of witches, demons, and other mischievous powers, or to counteract misfortune and illness.  The amulet is found both in the Orient and in the West, among tribes and nations down to the present day.  Assyrians and Egyptians, Greeks and Romans, Jews and Christians, fostered this ancient superstition, and, in varying degrees, foster it today.[3]  Despite technical and scientific advancements, superstitions and amulets continue to pervade the Western society.  Some of the amulets popular in the West are:

The Story Of The Festival of Love (Valentine’s Day) 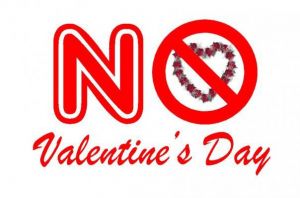 The Festival of Love was one of the festivals of the pagan Romans, when paganism was the prevalent religion of the Romans more than seventeen centuries ago. In the pagan Roman concept, it was an expression of “spiritual love”. There were myths associated with this pagan festival of the Romans, which persisted with their Christian heirs. Among the most famous of these myths was the Roman belief that Romulus, the founder of Rome, was suckled one day by a she-wolf, which gave him strength and wisdom. The Romans used to celebrate this event in mid-February each year with a big festival. One of the rituals of this festival was the sacrifice of a dog and a goat. Two strong and muscular youths would daub the blood of the dog and goat onto their bodies, then they would wash the blood away with milk. After that there would be a great parade, with these two youths at its head, which would go about the streets. The two youths would have pieces of leather with which they would hit everyone who crossed their path. The Roman women would welcome these blows, because they believed that they could prevent or cure infertility. 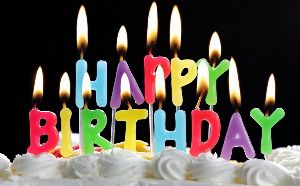 The following is a list of quotes from writings and writers, ancient and modern, religious and secular, attesting to the Pagan origins and nature of celebrating one’s supposed day of birth. Of course many contemporary, secularized people will object and say that “birthdays” no longer have any religious significance(despite the fact that all the ancient pagan rituals are maintained and preserved in the modern celebrations). However if you profess to be a Muslim, a Jew, or a Christian, you should not be doing this; Especially after you become aware that the word “secular” has the same definition as `irjaa(separating beliefs from actions, i.e. separating public actions from privately held beliefs(religion)). Yet “religion” is, from the Latin “religare”, “that which binds”, thus making Secular Humanism a religion in its own right.

“Shaytan has gained the mastery over them, and caused them to forget Allah’s Remembrance. Those are Shaytan’s party; why, Shaytans party, surely, they are the losers!,” –[Qur'an: Surah al-Mujadilah: 58:19].