The Present Qur'an is not the Original but that of Usman (R.A) 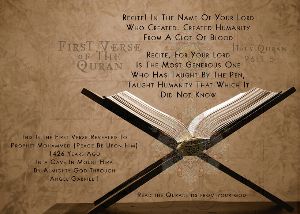 1. Prophet Muhammad (pbuh) himself supervised and authenticated the written texts of the Qur'an

Whenever the Prophet received a revelation, he would first memorize it himself and later declare the revelation and instruct his Companions (R.A. - Radhi Allahu Taala Anhu) - May Allah be pleased with him who would also memorize it. The Prophet would immediately ask the scribes to write down the revelation he had received, and he would reconfirm and recheck it himself. Prophet Muhammad (pbuh) was an Ummi who could not read and write. Therefore, after receiving each revelation, he would repeat it to his Companions. They would write down the revelation, and he would recheck by asking them to read what they had written. If there was any mistake, the Prophet would immediately point it out and have it corrected and rechecked. Similarly he would even recheck and authenticate the portions of the Qur'an memorized by the Companions. In this way, the complete Qur'an was written down under the personal supervision of the prophet (pbuh).

Does the Qur'an say that the Earth is Flat?

1. Earth made as a carpet. The question refers to a verse from the Qur'an in Surah Nuh:

But the sentence in the above verse is not complete. It continues in the next verse, explaining the previous verse. It says: "That ye may go about therein, in spacious roads." [Al-Qur'an 71:20]

A similar message is repeated in Surah TaHa: "He Who has made for you the earth like a carpet spread out; has enabled you to go about therein by roads (and channels)...."[Al-Qur'an 20:53]

The surface of the earth i.e. earth's crust is less than 30 miles in thickness and is very thin as compared to the radius of the earth which is about 3750 miles. The deeper layers of the earth are very hot, fluid and hostile to any form of life. The earth's crust is a solidified shell on which we can live. The Qur'an rightly refers to it like a carpet spread out, so that we can travel along its roads and paths.